So about 3 weeks ago, two of my colleagues, who are also mental, decided to convince me to enter the Spartan Sprint race in Edinburgh.

“It’s just a few obstacles and it’s only 6km” turned out to be the two biggest lies I’ve been told in my adult life.

The clues were in the waiver we all had to sign. There was an actual list of things that could kill you or “cause serious illness” such as “ingesting faeces”, “burns” and “animal bites and stings”. Oh tremendous.

On a cloudy Saturday, me and the guys headed to a wee farm just outside Edinburgh and realised we’d be running up a LOT of hills.

After a hilarious warmup and some burpees, we were let loose.

We realised pretty quickly that it was absolutely unquestionably not “only 6km.” Looking at strava routes recorded by people brave enough to use Garmins, it’s sitting between 8.5-10.5km. And 23 obstacles varying from jumping into neck-deep vats of slurry (“GUYS WTF IS THIS SURELY ITS NOT ACTUAL SHIT???” “Mate if it looks like shit and smells like shit… It’s probably shit!”) and carrying 30kg of gravel in a slippy bucket.  Fucking brutal.

Lots and lots of climbing, scrambling and literally being dragged up a hill by Owen while shouting Eminem lyrics at each other.

My biggest moment of glory? Throwing a fucking spear at a fucking target and nailing it. Perfectly.

Low points? Getting Actual Shit in my mouth (currently awaiting the onset of diphtheria) Tearing holes in the Arse of my leggings and my back on barbed wire, ending up backwards exiting the barbed wire crawl while pissing myself laughing, getting stuck in a queue on the log carry because the obstacles were so tough to negotiate and everyone was having to take it slowly, having to lug 20-30kg of gravel up a HILL in a fucking bucket which about broke my back, failing a rope climb miserably and having to do 30 burpees. Losing the skin on my heel within the first 3 km.

High points? Rapping Eminem on the side of a Pentland hill, swimming in shit, lots and lots of jumping in freezing streams, getting mud wiped all over my face, throwing actual shit at my mate, helping fellow competitors over and under obstacles, climbing a rope ladder on top of a hill, letting gravity pull me down the hills, getting told where the “girls weights” were and shouting “NAH FUCK IT” while lifting a “boys weight” 40kg kettle bell right up to the top of the frame, Bossing some monkey bars, and finishing it all with my buddy. Who I managed to kick in the face. Soz.

Time is virtually irrelevant in a race like that. 2hrs 7 minutes for us with over 550m of elevation gain and 23 obstacles, a lot of walking and wading through thigh deep mud. And 20 minutes of that 2 hours was spent waiting for the log carry obstacle. I was 75th female out of 373 and 18th out of 82 30-34 year olds. Absolutely chuffed to bits with that and loved the whole experience (sort of).

Owen, former marine, was absolutely the person to get me round the course, giving me the best ways to complete the obstacles and not die. Although I nearly killed him afterwards when he told me he found it easy. I suppose anything is easier if you’re not being shot at!

I managed to get to the penultimate obstacle before throwing a teeny tiny strop. 3 angled wooden ramps angled backwards towards you so that you couldn’t get purchase on them to climb. My arms had literally nothing left. I just. Could. Not. Do it. I had to rely on leg-ups to get me over them and then again for the last 3 wooden walls. It was here I managed to pull myself up so severely that I have bruises in places I didn’t think it was possible to bruise…

The final wee jump was over ACTUAL FIRE! We crossed the line triumphant and while a wifey in a dry robe shouted “YOU. ARE. SPARTANS.” Bloody amazing. You’re handed the most outrageously chunky medal and some SiS stuff to refuel.

After the run, the need to shower was strong. This meant marching into a stream of FREEZING water with a bunch of men shouting “pass the soap, lads” and being watched by those sensible enough not to bother with the whole horrid affair.

The changing tent was a dark, harrowing place. I had to bin everything. Literally everything including my sports bra. It was a brutal retirement for my old, worn out Asics GT1000s. Trying to get my clothes back on to wet skin in a low-ceilinged, dark tent was an experience not for the faint hearted or impatient. I tell thee. I punched myself in the face a few times and there was actual mud in my belly button.

The whole event was bloody brilliant. It was ridiculously expensive when we first entered but you get a LOT for your cash. Free race photography (it remains to be seen how absolutely WRECKED I look in the photos), gels and water at two stations, incredible support from marshals, a bloody amazing medal and t shirt plus the whole thing is run seamlessly. We had a GREAT time.

What did I learn about myself? I’m tougher and stronger than I gave myself credit for. I’m a determined wee fucker when I want to be. And I CAN do difficult things if I really bloody grit my teeth.

I’ve also discovered that I adore the freedom of running off-piste. It’s inspired me to sort myself out with some decent trail shoes and find some hills to crawl up.

In the mean time, I can add SPARTAN to my title. 💪🏻 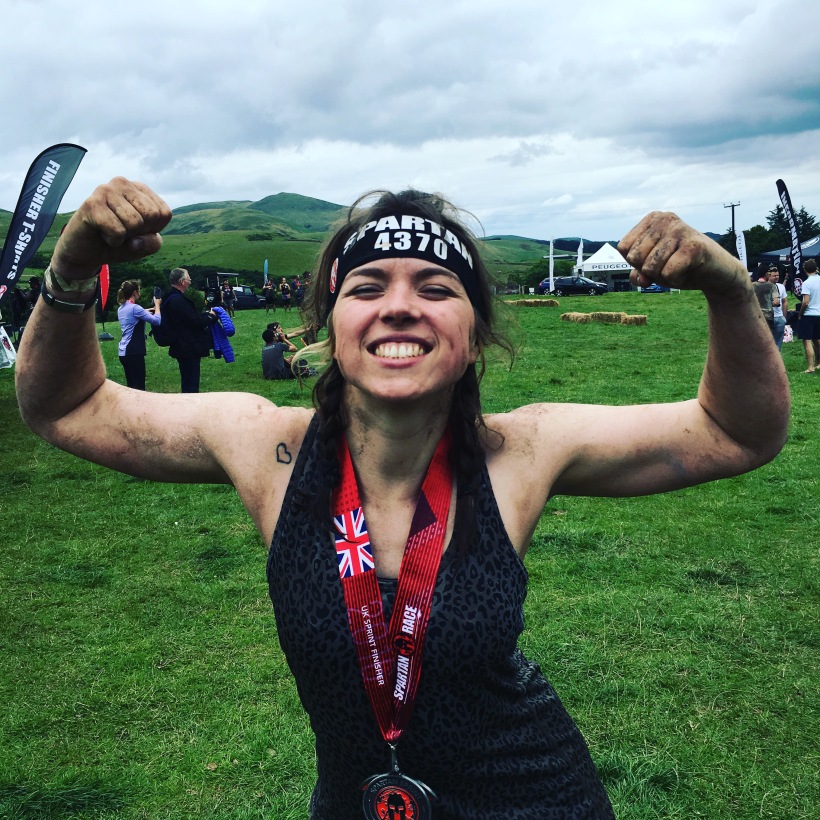