I have this thing. Which is quite annoying. You see, I’m incredibly accident prone. Which is funny because I’m the most paranoid, over-careful person you’ll meet. So it’s like I make myself fall over and fall off things and get sick.

I posted last week about my bout of super delightful tonsillitis which thankfully fucked off. However, I’ve since been left with a very tickly cough and resulting sore throat.

I gave up donuts and pizza’s and took up running to be HEALTHY and LOOK what it’s done to me??!!

Anyway. I ran/walked/cried for 20 miles on Sunday. OH came with me and ran for the first 6 before his knee gave in. I continued to mile 10 then turned back. Mile 8 was pretty brutal. I had one of my stitches that won’t go the fuck away. Then I got a bit pukey because I was trying to push through it. OH had caught me up walking by this point and was luckily on hand to clean me up and kick my arse into moving again.

At around mile 11, the humidity was getting to me. I was fucking miserable. The midgies were unbearable and for the first time in a long time I fucking HATED running. Hated it. Then a lovely man passed by, giving his daughter a piggy back as his misses pushed a pram and said “chin up,darlin, you’re doing well” and I had to wait 5 minutes until they’d passed so I could stop and sob and have a serious fucking word with myself.

When times get tough (and they got very fucking tough that day…) a wise chap I know has given me a few techniques to try and get myself to HTFU. So. Serveral shouty swears at myself, some serious reminding myself of how lucky I am to even be able to run in the first place, and I was on my way again. Around mile 13, I stumbled upon OH again who was freezing and waiting for me. He had really fucked his knee so was in no position to run back with me. He walked and I ran/jog/walked and eventually after 20.1 miles and 4hrs 12 mins, I got home.

I hurt. I had really given that last few miles everything. But I had smashed the big mental barrier I’d built for myself from day 1. My legs were actually ok. My hip wasn’t but fuck it. I’d only have 6.1 more miles to go on the day. AND I’m ahead of sweeper bus pace…

Monday arrived and myself and OH departed for 4 days in the highlands for our joint birthday. Mountain bikes strapped to the back of the car, suitcases full of kit. Perfect.

Except I’m Bean. Which inevitably means that something will go tits up.

I’m a very nervous cyclist and after 15 years of very little bike action, I’ve recently rekindled my love of it. Albeit very slowly and not too steep, please.

OH is very confident and lacks the Fear Gene that I have in abundance. He can quite happily throw himself down the side of a mountain at speed. Me? Not so much.

So on our Birthday, we had a huge breakfast and then set out a few hours later to adventure along the Great Glen Way. The first 6 miles were flat, slightly potholed canal track. Perfect. Nice and quick. Rainy then sunny. Cold, highland air. After 6 ish miles we reached Bridge of Oich where the lovely easy path stopped and the Great Glen Way got a bit fucking mental. Pot-holed muddy grass with hardcore forestry paths, steep ascents, descents and then….. The Tree Roots. About 100m in I shouted along to OH that I wasn’t doing too well. We were on a time limit so we decided we’d head back to Fort Augustus. Easy enough?

50m later, I hadn’t quite got up to enough speed to avoid the large tree roots and my front wheel slid off one, large chunky tyres failing to find grip and bedding into the mud in front of a root 6 inches high. Bang.

I came off sideways, my right shoulder hit the ground first, then my head, then my hip (which has a VERY impressive bruise). The bike landed on my hand. When I opened my eyes seconds later, OH was swearing as his already damaged knee twisted while getting his clippies off his pedals to try and get me up. I was bashed to hell but I was fine. Oh. I was also crying like a fucking toddler. “I *sob* hate *sob* this *sob* my *sob* head *sob* hurts”

“Get up, you’re ok. Take your helmet off”

No blood from my head.

My face was fine. But I was feeling VERY sick and dizzy and we both knew I’d given myself a concussion. We were at least 40 minutes cycling off road from the main road and my helmet was compromised and I had concussion so our only choice was to walk. For over an hour. Until we reached the sanctuary of a nice flat canal path. OH with his totally trashed knees and clippy shoes was not in the mood for Bean’s Concussion Banter.

“Oh. This is JUST like an episode of 999. Hours from anywhere.. DISASTER STRIKES”

“It’s not a disaster. you’ve bumped your head because you’re a fanny”

At one point, nausea got pretty bad so I was rushed into the shade of a tree while Mr “Just got my First Aiders Badge” used his iPhone flash bulb to check my pupil dilation.

Anyway. Hours of scary middle-of-nowhere-ness later, we arrived back at our cottage and I was chucked in a car and driven very quickly to Raigmore where a very lovely doctor lady examined me thoroughly and told me I’d be fine.

She also mentioned that I was very lucky to have been wearing a helmet and wearing it properly. Any looser, there’d have been brain damage.

When I told her I was training to run the Edinburgh Marathon, could I go for a run later? She said “NO! Rest. And no more bikes…”

Brilliant. Think I’ll hang my shiny new replacement helmet up until AFTER May 25th…

Damage Sustained to Forward RHS of hemlet. This was a slow crash at no more than 8mph on a track. The rock I hit with my Right temple was the size of a tennis ball. 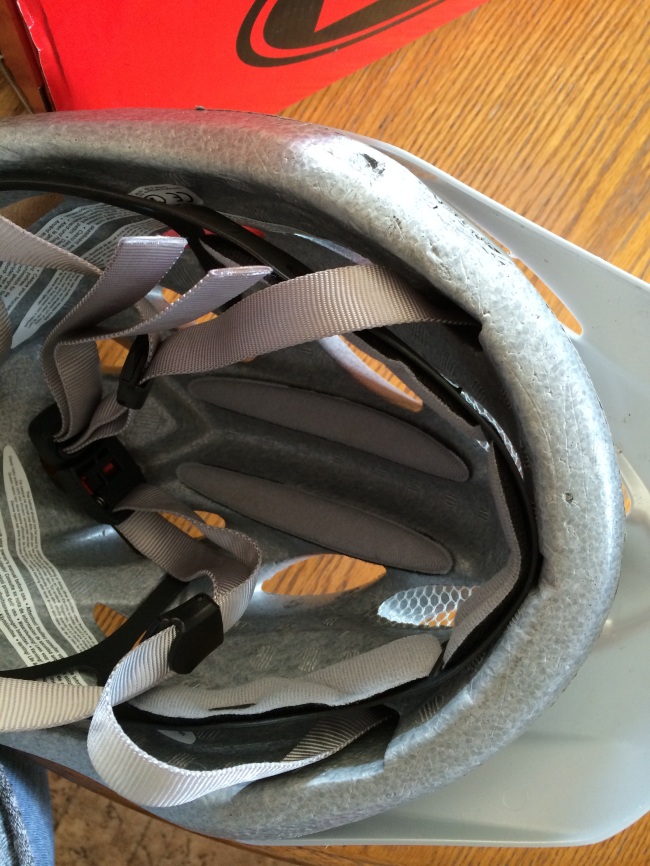 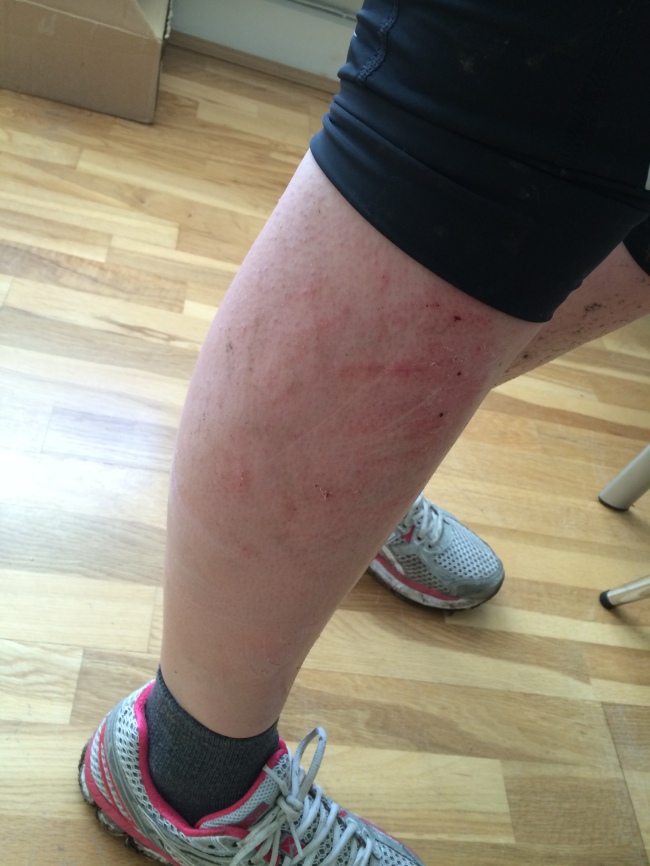 The bruise on my Right hand. I didn’t use it to break the fall. My reflexes aren’t that quick. Instead I broke the fall of my carbon fibre handle bars, which, as it turns out, are quite heavy when attached to a bike….