Here I am, sitting in a terribly posh hotel near Knaresborough with Farrow&Ball on every wall, having driven 200+ miles in a hired Peugeot that I’ve called Nigel. I’ve had 4 hours of driving to compose this.

I’m going to start with an interesting fact about me:

Note: I should probably state for the record that use of the term ‘interesting’ is probably generous…

Fact: When I’m cycling up mountains (hills/ slight inclines) I rap Eminem lyrics in my head.

I’ve no idea why. Probably because I know the words and the rhythm keeps my legs turning over. So imagine my horror when my coach sent me this meme:

Thus ruining Lose Yourself for me FOR ALL ETERNITY.

I discovered this when Sean and I did a route recce of the Aberfeldy Tri bike route on Friday. When climbing what can only be described as EVEREST (Schiehallion) on the way back, I started going through the words to Lose Yourself in my head. By the time I reached the summit, I was basically just crying and gasping the word SPAGHETTI over and over until I found a sign post to lean against and gather my tattered soul back together.

The small victory of the day was 90km and over 2500ft of elevation gain as my bro in law and I tested our biking skills. It was tough. No sooner had I uttered the words “I hope I don’t actually ever need to change an inner tube…” did the valve sheer under light pumping (snigger) and I had to replace a tube before we even set off. Under 5 minutes though! Delighted!

The route was absolutely stunning. You are essentially climbing from mile 5-16. It’s tough on the way out, but the way back is something else. Almost the same elevation gain as the way out but over a much shorter distance. 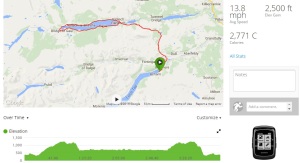 Have to say, that elevation looks steeper (as steep as it felt) on my iPhone screen…

I managed to take some snaps on the day too:

The clouds just lifting off the hills ahead.

Schiehallon Road. (It definitely does not look as steep as it feels!!!) Loch Rannoch in the distance.

The recce was both brilliant and terrifying. What an absolutely incredible part of the world to race in. And it’s home. And shit. I need more hill work practice and SOON.

Stella was just perfect. No clicks or creaks and smooth-as-silk gearing. She flew.

Initially we’d planned a short brick run afterwards, but after the climbs, we felt it was sensible to maybe just have a sit down and a think about our life choices instead. Also, I’ve been on a recovery week after Coach examined my data in Training Peaks and realised I was loading significantly more than I ever have. And we all know what happens when I do that…. INJURY/DEATH/FLU.

I want none of those.

I felt really rather good after the bike. Like 10 minutes after. Ok 20. But the fact remains, I wasn’t in tatters. The tri-shorts held out. My arse was tender at best, but I managed. And while the thought of a half marathon kind of made me want to curl up and sleep, I could do it. I think…

I even managed a smile after I’d peeled actual roadkill entrails off my leg. I KNOW.

So now things get a little interesting… I’ve arrived in Farensby in Yorkshire having driven Nigel the Peugeot down this afternoon. (Thank feck for Costa Coffee monopolising most service stations on the M74/M6) This can only mean one thing. Buying Season is upon us. The next 12 weeks consist of office/travel/training/office/travel/training. My plan, which I’ve worked so hard to keep consistent, will take some re-shuffling as I move through this tricky time. I am also project managing a huge department move at work. Stress will take hold pretty soon. The focus must remain on injury-prevention, calorific intake, sleeping when I can and maintaining fitness while continuing to push for improvements on the bike. It’s going to be hard, but in 4 weeks I will (hopefully) be wearing a medal while sipping (downing) an ice cold beer…

Luckily my London trips feature hotels with gyms so I can squeeze some light biking in there. And trainers fit in a suitcase…

And so begins the final push… 4 WEEKS TO GO!

In a bid to re-establish the CORRECT version of the song in my head, I’ll leave you with this: